Masonic Lodge No. 142 was organized in 1873 with Samuel Saylor appointed master. The first meeting was held in the new schoolhouse using boxes for the altar and jewels made of tin. Early members included Muse, Peters, Munger, Spivey, Lynch, Neal, Ashbaugh, et al. In 1879 a 25 x 80 ft. two story building was built on this site with an upper story lodge room that was a model of beauty and ornament. The lower level was to be rented to the county for offices. Throngs throughout the state were present for the ceremonies with a grand promenade and the laying of the cornerstone by Grand Master E. D. Hillyer. In 1883 the building was enlarged at the cost of $13,000 to provide space for a court room and opera hall, the site of grand balls and concerts. The Magnolia Lodge No. 231 was chartered in 1884 with Robert Collins, worshipful master. It united with Lodge No. 142 in 1901. The building front was covered with brick in 1961. The upper story lodge rooms have retained their architectural beauty. 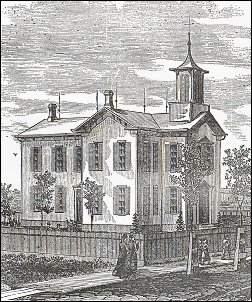 is in contemplation, to be erected in the spring of 1883, at a cost of $12,000. This addition will be used by the county, for county offices and court room, for three, with a privilege of five years.